Just a little nugget of information, for those who dislike the idea of genetically modified plants, consider this, Maize is not natural. Without the intervention of man it would simple cease to exist.

If the cobs ripen to maturity the kernels would not fall off and germinate like you’d expect, they would simply rot away. No where in nature is there a plant similar to it although there is a plant Called Teosinte 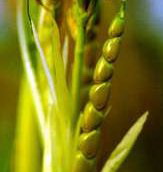 which has a similar genetic make-up but looks only vaguely like modern maize. It has several tufts sprouting from its wispy stem and is about as nutritional as straw.

It’s that much of a brain teaser that in 1969 there was a conference in Illinois to try and create a paper on the origin of maize. It’s such a contentious issue it descended into a bun fight with those partaking hurling abuse at each other and nothing useful was discovered or noted. We know it originated on the plains in western Mexico but how is a complete mystery. Why would you grow a plant that had no nutritinal value and then keep growing it, selecting the plants with the largest fruit and then growing them, for thousands of years until it became Sweet corn? Like wheat, maize has a few issues nutritionally. It contains Phytates which inhibit the absorption of iron and is deficient in essential amino acids. So even once you’ve got it to the stage where you have something worth eating if it was your staple, which it clearly was, you were in danger of doing yourself damage.

Man has been adapting and shaping his food be it vegetable or livestock for 1000s of years, GM just does it a lot quicker. I’m not 100% convinced fiddling with the genetics of nature is correct but if it stops 10,000s of people dying through starvation every year it can’t be that bad a thing either.