I’m supprised there’s not more protected Gins the distilleries seem to be popping up everywhere these days. The popularity of Gin has grown all over the world in many major Cities they have bars that serve every type of Gin known to Man and Woman.

There is only one with PGI status though and that is Gin from the Black Frairs Gin Distillery in Plymouth. As you’d guess it was once a Friary for the dominican order.  The building itself has gone through a few lives, debtor’s prison, refuge for Huguenots and incredibly it was the last place the Pilgrim Fathers slept on English soil before heading off on the May Flower to America.

It is indisputedly the oldest working Gin Distillery in the world. Records show they’ve been distilling on the site since 1690 and it is Britains oldest remaining distillery. For 200 years it carried the name of Coats and Co.

Originally The Royal Navy were Plymouth Gins biggest customers, no ship left port with a barrel or two on board. It was a tradition in the Royal Navy that all newly commissioned vessels receive a “Plymouth Gin Commissioning kit”, a wooden box containing two bottles of navy strength (57% proof) Plymouth gin and glassware. Plymouth Gin is traditionally used in the historic Sailor’s celebratory drink Mahogany composed of gin beaten into warmed black treacle, I’ve yet to try one but I bet it’s warming. In British India, it was mixed with the tonic water consumed for the anti-malarial properties of quinine, which led to the creation of the Gin and Tonic.

So what’s it like compared to London dry gin? Definately more Juniper taste and not as dry and perhaps a bit of extra spice. Try some next time you run out of Gordons. 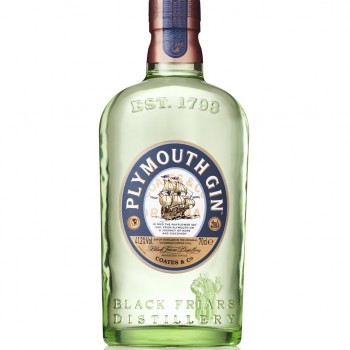 Lots of history to be had here and shop too.